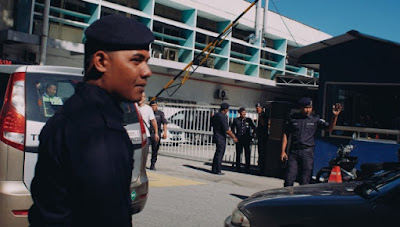 The body Kim Jong-un's brother is being flown out of Malaysia. The remains of Kim Jong Nam were said to be on a plane to Beijing amid claims of a 'deal' struck with his brother. Nine Malaysians left stranded in North Korea as a result of the row between the two countries are also expected home on Friday (tomorrow).
A van carrying Jong nam was seen leaving hospital Kuala Lumpur for the international Airport's cargo complex.

Malaysia had been waiting for more than a month for Kim’s next-of-kin to come forward and claim the body.

It is believed the remains were being sent to Beijing in exchange for the release of the Malaysians prevented from leaving North Korea.

An embassy vehicle carrying several people was also seen leaving the compound of the North Korean embassy in Kuala Lumpur.
Posted by dubem naija blog at 10:30 am