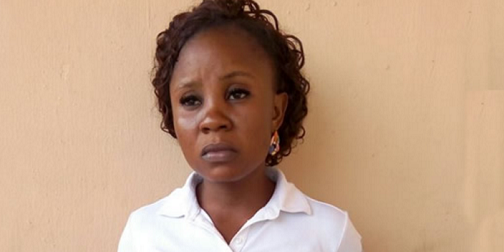 The Economic and Financial Crimes Commission, Ibadan zonal office, Oyo State, on Thursday said a herbalist had been arrested by its operatives for falsely obtaining N45m from a victim under the pretext of offering herbal and spiritual healing. A statement from the EFCC Head of Public Affairs in the zone, Ayo Oyewole, said the suspect, Aminat Okiribiti, 34, committed the crime with two other accomplices at large, one of who is said to be her husband.
The statement said, “Aminat (Okiribiti) was arrested for an alleged case of conspiracy and obtaining money under false pretences.  In a rehash of the old infamous advance fee fraud tactic of spiritual help and solution to all problems, a victim recounted her ordeal in the hands of a syndicate to our operatives, signalling a warning to the public.

“Aminat, alongside other three cohorts still at large, conspired, using the decoy of providing cure and spiritual solution to the health challenges of the victim’s children and fleeced her of the sum of N45m.

“Aminat, who is married to one Wande Okiribiti, 47, who is still at large, confessed that some of the money obtained from the victim was collected through her (Aminat’s) bank account domiciled in one of the new generation banks located in Ibadan.”

The statement said Aminat and the victim met sometime in October 2014, at Utako, Abuja, adding that the suspect would be charged to court at the end of investigation.
Posted by dubem naija blog at 10:25 am