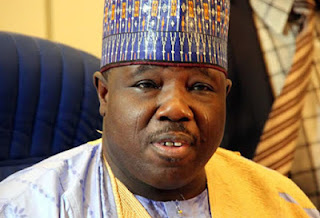 A High Court of the Federal Capital Territory (FCT) in Kubwa, Abuja has restrained Ali Modu Sheriff from further parading as National Chairman of the People’s Democratic Party (PDP) and acting or taking decisions on its behalf. Justice Nwamaka Ogbonnaya, in a judgment Wednesday, held among others, that by virtue of the June 29, 2016 judgment by Justice Valentine Ashi (of the Apo division of High Court of the FCT), the appointment of Sheriff and other members of his Executive of the party remains voided.

Justice Ashi had, in the judgment in a suit filed by Joseph Jero, marked: FCT/HC/CV/1867/2016, voided the amendment to Article 47(6) of the PDP constitution, on which basis Sheriff and his Executive emerged at the convention held by the party on December 10 and 11, 2o15.
Justice Ogbonnaya said there was no evidence before her that the judgment by Justice Ashi had been appealed. She said even if appealed, mere filing of an appeal against a judgment cannot act as a stay of the judgment’s execution.
She said the judgment by Justice Ashi remained valid until it is set aside by an appellate court, and that parties affected by the judgement and orders made in it are bound by the said orders and declarations.

Justice Ogbonnaya, who granted all the reliefs by the plaintiff, and made an order “setting aside and or nullified the act or conduct of the defendant (Sheriff) as National Chairman of the PDP or anything done by him in the name or on behalf of the party for being unlawful, null, void and of no effect whatsoever.”
The judge also ordered that Sheriff cannot lawfully and legally instruct any counsel for. Or on behalf of the PDP, convene any meeting of the party; conduct any congress/primary for the purposes of nominating the party’s candidates for any election.
Posted by dubem naija blog at 7:15 am