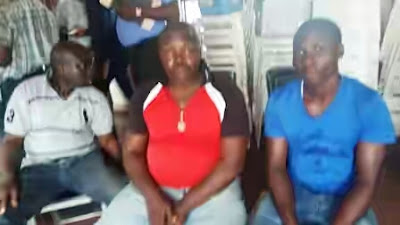 The police in Lagos Monday paraded three men alleged to be land grabbers. The suspects, Igbokun Ogunkoya, 40, Ayoola Ahmed, 20 and Lateef Alase, 44 were arrested on Sunday at Alade village in Ikeja. They were alleged to have forcibly entered and willfully damaged a property before detectives rounded them up based on tip off. But the suspects who denied the allegations against them, said they were contracted by the owner of the property, one Abayomi, to excavate an abandoned foundation.

According to Ogunkoya who spoke on behalf of the three, he was a registered contractor and invited the other two to work for him after the said Abayomi contracted him for the job.

“We are not land grabbers and we have never been. I am a contractor and I invited them to work for me. Ahmed was operating the tractor and Alase works for me. We started work there on Saturday. It was the owner, one Abayomi who gave us the job and that Saturday many policemen from the Special Anti-Robbery Sqaud (SARS) were on ground. “We worked on Saturday and returned on Sunday to continue work.

There were three policemen there with us still. It was while we were working that some policemen came and said we were land grabbers. That we were not authorised to do that work. They arrested the policemen with us that they were on illegal duty but since then, we have not seen the three policemen,” he said.