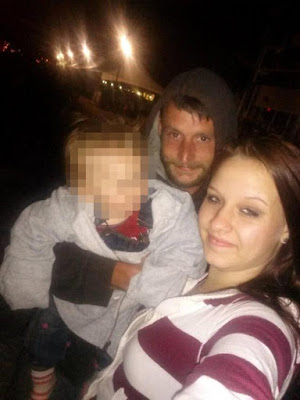 A young mum committed suicide by climbing over a backyard fence and getting mauled by two dogs, according to police. Rebecca Hardy died after suffering “severe facial and neck injuries” in the December 3 attack at a home in Port Huron, USA, local authorities said. But the 22-year’s fiancé has questioned the Port HuronPolice Department's suicide finding, the New York Daily News reports.He said.

“I, in no way, shape or form believe that she was looking to hurt herself on that day,” he said. “She had a little girl. … She wanted us to be a family.” Yet Oakland County Medical Examiner Ljubisa Dragovic noted that Hardy had recently been kicked out of her home and had tried to kill herself before.

These were attack dogs. These were vicious dogs in an enclosed space,. “She obviously was aware of that, because she climbed over the fence to subject herself to this threat.”
Posted by dubem naija blog at 1:45 pm