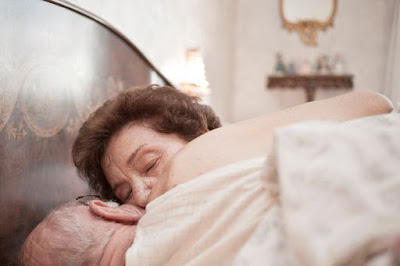 A 91-year-old woman is believed to have suffocated during a sex game with her 49-year-old neighbour.  The woman was found on her bed naked from her waist down next to a sex toy in Aveiro, 50 miles south of Porto, Portugal.
A married dad-of-two living next door has been arrested after DNA analysis of semen recovered from the scene. He was released on bail after going before a judge who was told autopsy results showed she died from asphyxia thought to have taken place during a sex game that spiralled out of control.

The death is believed to be the result of a tragic accident.

A neighbour described the woman, who lived alone, as being “very active” despite her age and said the neighbour often went round her house to do odd jobs.

Police say there was no sign of a forced entry and nothing had been taken from the house.

Source: UK Mirror
Posted by dubem naija blog at 6:09 am