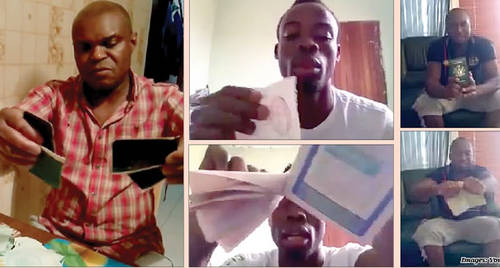 As of Saturday, no fewer than three videos were seen on the online video sharing platform, YouTube, in which some Igbo denounced their citizenship of the country and declared their allegiance to Biafra. The Nigeria Immigration Service has, however, warned that such act is criminal and attracts a jail term.

The Public Relations Officer of the NIS, Deputy Comptroller Ekpedeme King, while reacting to the development in an interview with our correspondent on Saturday, said the service was not aware of the passport tearing.

King said, “There is a new Act called the Immigration Act 2015 which stipulates the punishment for any alteration or destruction of Nigerian passport; it is a jail term with conditions.
“Those who mentioned their names, if we find out that they tore their passports, will be taken to court. A process has to be followed.”

Checks by our correspondents showed that the Immigration Act 2015, among other conditions, states, “Altering existing travel documents renders the holder on conviction of a two million naira fine and/or imprisonment for a term of three years.”

The Department of State Services had reportedly arrested and detained the founder of the guerrilla broadcasting channel, Radio Biafra, Nnamdi Kanu, at the Murtala Muhammed International Airport Lagos on his arrival from London recently.

The Nigerian Police had also arrested and arraigned many members of the Movement for the Actualisation of the Sovereign State of Biafra and other secessionist groups recently. Thousands of members and supporters of MASSOB had last Tuesday embarked on a protest in Port Harcourt, the Rivers State capital, demanding to break away from Nigeria.

In a swift reaction, governors in the South-East and other leaders in the zone had dissociated themselves from the protests, saying they were not in support of the group.

A former Head of State, Gen. Yakubu Gowon (retd.), while speaking to Channels TV on Friday during his visit to Nasarawa State, had said the resurgence of a group claiming to be Pro-Biafra would not in any way pose a threat to the sovereignty of the country.