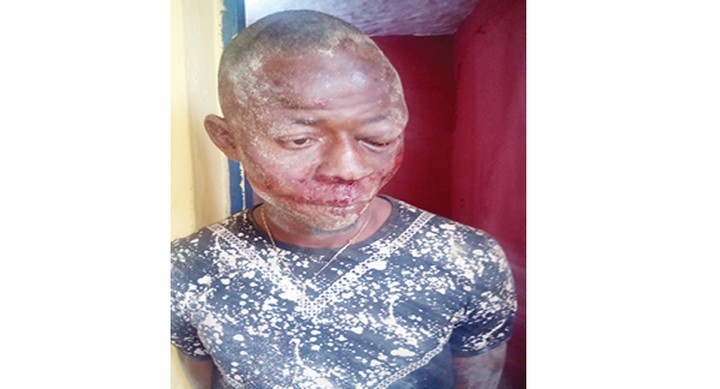 A suspected armed robber is now in police net in Benin, Edo State, after the lady he attempted to rob disarmed him. The victim, a female newscaster with the Nigeria Television Authority (NTA), was said to have given the suspect, identified as Stanley, the fight of his life when he tried to rob her. She succeeded in collecting the robber’s locally-made pistol from him.

The suspect was handed over to policemen from Oba Police Station, Benin. During interrogation, Stanley mentioned names of his gang members. The police went after the gang and arrested five members. The leader of the gang is, however, still at large. The newscaster, who wished to remain anonymous, said she went to Benin from Lagos, for a wedding when the incident occurred.

She said she was cleaning her car, around 5:30am, when the suspect appeared with his gun and ordered her to give him money. She added: “I was cleaning the car when I heard someone ordering me not to make a noise. He had been hiding behind my car all this while.

He had a gun with him. He said I should take him inside the house and give him money. I begged him not to shoot, that I will give him the money. I also appealed to him that my sister, whom I lodged with, is heavily pregnant. I told him that my sister may go into force labour at the sight of the gun. He was not interested in my pleas. He held the gun to my waist. As we got close to the entrance of the sitting room, I summoned courage. “I screamed Jesus! I did not know what came over me, but I suddenly turned and grabbed the gun.

I struggled with him and turned the gun to his chest. He bit me. I bit him back. As we struggled, we reached where my car was parked. I screamed and started calling for help. My brother inlaw ran out. He attacked the robber and kicked him until he fell flat on his face.”

The shout attracted residents who rushed out and joined in wrestling the gun from the suspect. He was eventually beaten up mercilessly. The residents wanted to beat him to death, but others suggested they hand him over to the police.

Recovered from Stanley were a locally-made gun, three cartridges, a wallet, a phone and a wristwatch. The seller of the gun has also been arrested. Police investigation revealed that Stanley is a commercial bus driver. But Stanley claimed he did not know why he took to robbery.

He said: “It was my gang members that gave me the gun. I targeted the house because I thought I could rob people living there successfully. I entered the compound by jumping the fence. I never expected that the lady would react by grabbing my gun. I planned the operation in my house. I entered the compound around 2am.”
Posted by dubem naija blog at 11:07 am