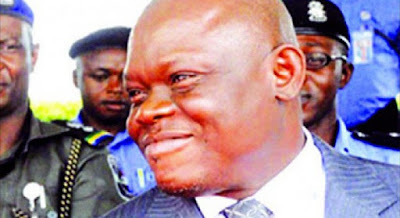 The Trent can confirm that Mr. Gordon Obua, former Chief Security Officer to President Goodluck Jonathan has passed away in the custody of Department of Security Services (DSS) in its Abuja Headquarters where he had been detained since Thursday, July 16, 2015 on the orders of President Muhammadu Buhari.

Sources who have been monitoring the situation have confirmed Obua’s passing to The Trent.

Obua, who was being detained by the DSS in an underground dungeon for undisclosed reasons was being denied access to his lawyers, family, and his doctors on the orders of the new Director General of the DSS, Lawal Musa, which serves as Nigeria’s secret police.

Our sources say Obua’s remains are still in the custody of the DSS at the time of filing this report.

http://www.thetrentonline.com/breaking-news-former-cso-to-president-jonathan-gordon-obua-dies-in-sss-custody/?utm_content=bufferfc341&utm_medium=social&utm_source=twitter.com&utm_campaign=buffer
Posted by dubem naija blog at 7:36 am