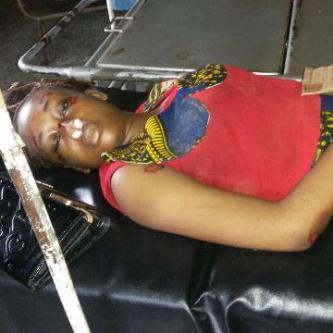 Two Female students of the University of Benin,,Ugbowo Campus were hit by an oncoming vehicle at 10:15Am sunday morning,,19th July 2015.

It was gathered that the two girls were hit by an Army Vehicle with the inscription "Thunder Storm Patrol 28" while they were crossing the Lagos/Benin Expressway which is just in front of the school gate. They were both coming out of their off-campus hostels Located at BDPA Beside Odaro Plaza.

After the hit,,one of the girls was found lying on the road while the girl who was hit first was found in the bush close to the Road side and they were both rushed to the hospital.

An I.D Card found in one of the girl's Bag indicated she was a 200 level student of philosophy while the details of the other cannot be confirmed yet.

As at the time of filing this report,,it was gathered that the 200 level philosophy student named Halim Rita Awele was dead while the other girl is in critical conditions. She is currently suffering from internal Bleeding.


http://www.ngschoolz.com
Posted by dubem naija blog at 8:06 am