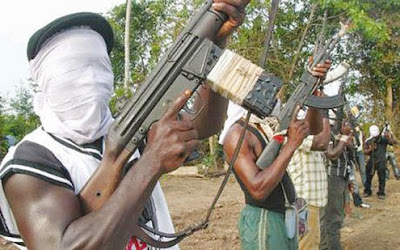 Hearing the story of kidnapped people for ritual purposes or for a ransom is disturbing and many just thank God it isn’t them and pray against it. The truth however is that with dangerous elements that carry out these dastardly acts roaming freely amongst us, everyone is at risk. Here is the story of a young man, Timothy Lawani, 25, a trader at Suleja roundabout area, who was kidnapped for ritual purpose but survived the ordeal.

Lawani, in an interview with LEADERSHIP Weekend, said it was God that saved him after he was kidnapped, tied up and was to be sacrificed in Kano.

The incident happened at about 4am on January 14, 2015. Lawani went outside his family house at Old Barracks, Suleja to ease himself, when suddenly he heard someone call his name. Walking towards a red Volkswagen Golf parked behind his house, he was surprised to see an old friend, Friday, comfortably seated in the car beckoning on him with two hefty men.

Narrating his story, Lawani said, “In my confused state, I greeted them. One of them held me and the other sprayed a powder on my face. That was the last thing I could remember. I later saw myself in a very large hall with other young men who were tied up. The kidnappers kept bringing other people to join us. Sometimes, they even offered us food to eat which we all refused. They then said, whether we ate or not, we would die after all.

“After two days, we were made to put on white apparels and join a queue. I noticed that anyone who goes out never comes back; I was so scared. When it was my turn, I went outside, saw a large pool of water like swimming pool and a man standing by the side chanting incantations. He later ordered the guards to take me inside that they were not in need of someone like me.”

Continuing, Lawani said, “In my presence, the man called on Friday who came about 40 minutes later. After telling him that I was not acceptable for their rituals, Friday started flogging me mercilessly. He then ordered the men to take me out, but not before the ritualist got angry, and ordered the hefty men to bring Friday for sacrifice in my place. I heard him beg them to give him just 30 minutes to enable him bring another person, but the man said there was no time.

“With Friday’s hands and legs tied, the man began chanting incantations again. This time, I saw crocodiles coming out of the water. Friday was then thrown inside, the reptiles feasted on him. I was not myself because of the sight of blood and how such large reptiles ate up a whole human being. The man later ordered the men to throw me out, that I was useless to them. They sprayed a powder on my face again and I became unconscious.’’

On how he got back to his senses, Lawani recalled that he was sheltered by a Hausa man who saw him wandering in Gomoja area of Kano State.

After prayers were offered for him for about three days, he regained consciousness but could not speak. It was then he wrote down his father’s phone number which he easily remembered and with which they used to reach his family, that had been searching frantically for him.

LEADERSHIP Weekend later learnt from his elder brother, Theophilus Lawani, that his friend sold him to the kidnappers for N150,000. Theophilus further revealed that before the Hausa man called them from Kano, Lawani’s friend sent them several messages, telling them to forgive him for selling his friend.

“Even before we got the text from Friday, we reported the case at A division Police Station in Suleja, but the Policemen demanded the sum of N70,000 in order to start investigation. Since we do not have such amount, we resorted to prayers, and God answered us. We have decided to take my brother for further prayers in Kaduna,” Theophilus stated.


All efforts by LEADERSHIP Weekend to speak with the Divisional Police Officer (DPO) of A Division was futile as it was referred to the Public Relations Officer (PRO) at the headquarters in Minna. Meanwhile, a Police officer who pleaded anonymity, said there have been several incidents of kidnapping within and outside the state, but the police have tried to curtail the rate by investigating and arresting suspects.

Giving tips on how people could prevent themselves from being kidnapped, he said, “People need to be wary anywhere they are. An isolated target is easier to pick up. It is better for people to be strengthened by being in groups. Hostage takers would have to work harder to kidnap members of a group than to kidnap an individual. People should also try to promptly report any kidnap case around them to the nearest police station.”

According to a security expert, Bashir Wole, people should be very cautious whenever they come in contact with any stranger. “People ought to become more alert and discerning to protect themselves from being kidnapped. Government also needs to do more in terms of detecting, arresting and punishing kidnappers, such that the severity of the punishment would deter others from engaging in such.

“There must be enforcement and punishment that can deter people from going into kidnapping. If people are punished, maybe by capital punishment, others would conclude that it is not worth it. The criminal justice system must work. The reason kidnapping is lucrative in Nigeria is impunity; people think they can do it and get away with the crime. The fear of the grievous punishment should be such that will keep people from further committing the crime.”

The general public is advised to heed to advice from security experts and the Police by being alert and security conscious to avoid timothy’s experience. We should all learn to be security conscious wherever we goes.
Posted by dubem naija blog at 8:18 am