Man is stabbed to death during a robbery 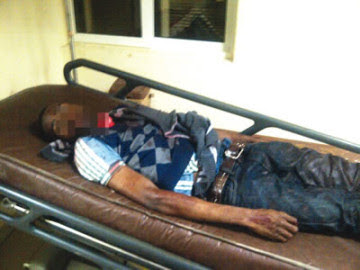 A security man, identified as Wasiu Okanlawon, has been stabbed to death by armed robbers in the Ile Zik, Ikeja area of Lagos.


It was gathered that Wasiu, who was attacked last Friday at about 9pm, was killed while he and a female colleague were returning home from work. It was gathered that Okanlawon and the colleague, whose name had yet to be ascertained, were going in a commercial bus, when the bus had a flat tyre.
The bus passengers were said to have alighted, while the driver tried to change the tyre. The robbers, whose number had yet to be identified, reportedly came out of hiding and attacked the stranded passengers.

A colleague of the deceased, said Okanlawon was stabbed to death when he intervened when the robbers tried to sexually harass his female colleague.

“He and the lady from our office were in the commercial bus going home. When they got to the Ile Zik Junction in Ikeja, the commercial bus had a flat tyre, and all the passengers alighted. They stood by the roadside, while the driver changed the tyre. Suddenly, the robbers came out and began to rob the passengers of their possession. “They came with weapons and attacked them. Wasiu, who was with his laptop, tried to escape from the area, but he noticed that they had descended on the lady, so he went back. It was then that the robbers collected his phones and the laptop, before stabbing him in the neck.”

It was also gathered that the matter was reported at the Ikeja Police Division, while Okanlawon’s corpse was deposited at the LASUTH’s morgue.

Although the deceased was a muslim, his burial was delayed so that an autopsy could be carried out. It was added that the female colleague had been invited by the police for questioning. The Police Public Relations Officer, DSP Kenneth Nwosu, confirmed the incident. He added that investigation was ongoing.

source: linda's blog
Posted by dubem naija blog at 8:33 am