I’m Destined To Be A Robber Teenage Robbery Suspect Says 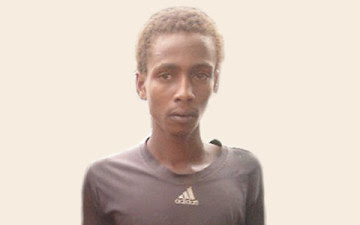 For two teenagers, Sani Harry and Muhammed Yahaya, who were nabbed by the Kwara State Command of the Nigerian Police Force for allegedly robbing people with a cutlass, becoming robbers was something they had no power to resist.


The suspects, who claimed to be herdsmen and farmers, however, were remorseful enough to warn other youths like themselves to steer clear of robbery and other crimes.

Seventeen-year-old Harry said he was destined to be a robber as according to him, he could not resist the temptation.

He said, “It is destiny that made me to start robbing people. The temptation just came in a strong way. I just did it without knowing why I did it. I have never killed anybody. We normally rob with cutlasses and sticks. I regret my action now. I will not do it again.”

Yahaya on the other hand, expressed remorse for robbing people. He added that he would never get involved in robbery if he was pardoned and released.

Also paraded by the police was a robbery suspect, simply identified as Ibira, 25. Like Harry and Yahaya, he said he did not know what pushed him into the crime.

“I am a farmer and cattle rearer. I do not know why I decided to pertake in robbery. But believe me, I will never do it again.”

The Commissioner of Police, Kwara State Command, Mr. Salihu Garba, said the arrests of the suspects were in fulfilment of the command’s promise to the people of the state to reduce or possibly eradicate violent crimes in the state.

Garba, who spoke through the command’s Police Public Relations Officer, Mr. Ajayi Okesanmi, said Harry and Yahaya were arrested with a cutlass and face masks.

“One Hadiza Abubakar ‘F’ of Sabo Gada Village via Bode Saaadu reported that on Monday, June 29, 2015 at about noon, she was waylaid and robbed by a gang of armed bandits. Investigation into the case led to the arrest of Harry and Yahaya,” Garba said.

He said the suspects would be arraigned soon since they had confessed to the crime.

Also paraded by the police were some former prison inmates, who were nabbed after carrying out robbery they planned while in incarceration.

The police commissioner said the house of one Rhoda Adekeye ‘F’ at Tanke area of Ilorin, Kwara State was invaded by five armed men.

He said the suspected robbers tied the victims and robbed them at gun point. Valuables including one Toyota Camry saloon car with registration number Lagos FST 828 AW and mobile phones were taken away from the victims.

According to him, investigations later led to the arrest of Blessing Fayemi (19), Stephen Bamidele (32), Samuel John (24), and Juma Olasanmi (27).

Garba said an American Brony Pistol with 11 rounds of live ammunitions was recovered from the suspects, adding that they had confessed to committing the crime.

He stated that investigation revealed that the suspects were at one time inmates of Madala Prisons where they allegedly perfected plans to carry out series of robbery attacks when they regained their freedom. He said the police had intensified efforts to recover the stolen vehicle.

The suspects – Oladayo Yusuf (22), Kelvin Orji (24), OgunnikeAdeola, (27), and Oludia Shogo (23) were arrested for armed robbery and unlawful possession of firearm.

He added that the police recovered one Ghana manufactured triple barrel pistol; five live cartridges and one 0.9mm live ammunition from the suspects.

Garba said, “At about 10am on Wednesday, July 1, 2015 the above named suspects were arrested at Sango area of Ilorin, with the above listed exhibits.

“On interrogation, they admitted being members of Alora cult group preparing for an operation when they were arrested. They confessed that they came from Lagos. It is pertinent to note that lately, vehicles have been snatched at gunpoint and were traced to Lagos.

“Investigation is ongoing to recover some of the vehicles they have stolen.”