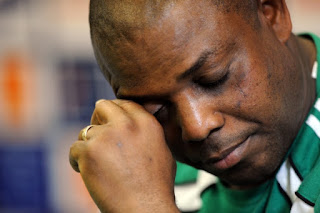 Super Eagles coach, Stephen Keshi, has disclosed from his base in the United States that he is yet to receive any official letter from the Nigerian Football Federation (NFF) informing him of his dismissal.


The NFF released a press statement on Saturday night confirming that it had sacked the former Eagles skipper two months after he signed a new two-year deal as head coach of the Nigerian national team. Keshi has also said he would go to the Court of Arbitration for Sports (CAS) to seek redress.

I haven’t received any letter to that effect. Today is Saturday, anyway, Keshi told newsmen shortly after the NFF announcement. “They think their deceit will fool Nigerians? We’ll meet in CAS where justice will prevail,” he said.