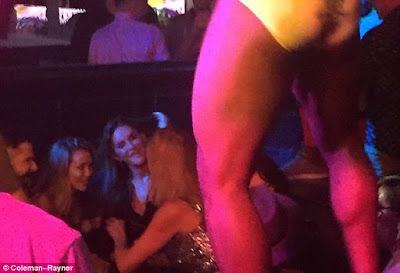 She is experiencing many firsts as a transgender female, including having girls' night outs. Caitlyn Jenner was spotted having some fun with her gal pals and numerous male strippers inside The Abbey in Los Angeles.

The 65-year-old reality star appeared to be in good spirits sipping on cocktails and dancing to the music as she was joined by her mentor Candis Cayne and David Cooley, the owner of the LGBT-inclusive hotspot.
Posted by dubem naija blog at 8:00 am