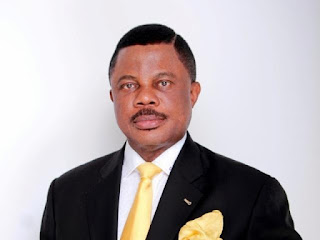 Anambra State Governor, Willie Obiano during the weekend revealed that his party, All Progressives Grand Alliance (APGA), will do all within its power to win back Peter Obi.


Speaking at Victor Umeh’s thanksgiving service to mark his successful tenure as APGA’s National Chairman which also coincided with Umeh’s 53rd birthday and his 25 years of marriage, Governor Willie Obiano said, “We will win back Peter Obi”.

The statement took the audience by surprise considering the media war between the protégés of both men which have seen them attack each other principal at the slightest opportunity. Peter Obi is the former governor of Anambra state. He governed the state under the APGA banner and then handed over to Willie Obiano, an old friend who he invited from Lagos to come govern the state. Okwute, as Peter Obi is fondly called by his admirers, later left for the People’s Democratic Party (PDP).
Posted by dubem naija blog at 2:23 pm