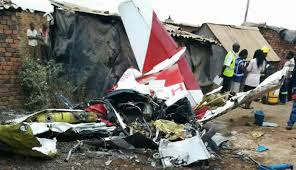 A small aircraft chartered by Mozambican ports company Cornelder has crashed near the Mozambique-Zimbabwe border, killing all six occupants. It is believed that six people among them four Green Motors Services (GMS) directors died in a plane crash at Vumba Mountain this morning.
According to Zitamar, Cornelder Mozambique, the company using the plane, is a private joint venture between Moçambique Ports and Railways (CFM) and Cornelder Holdings based in

Rotterdam, Holland. The company's chairman, Adelino Mesquita, was named among the victims of today's crash.

It is believed that the four directors were on their way from Beira to attend a board meeting in Mutare.

Investigations to establish the cause of the accident are underway but preliminary investigations attribute the crash to bad weather.

The wreckage of the eight seater plane and body parts of the victims were strewn all over the place near the mountain peak.
Posted by dubem naija blog at 9:09 am