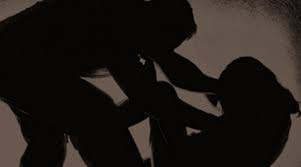 An Ibadan Chief Magistrates’ Court on Friday remanded a 40-year-old teacher, Sampson Eyo, who allegedly raped his nine-year-old pupil. The Chief Magistrate, Mr Taiwo Oladiran, directed that the accused should be remanded at the Agodi Prisons custody pending the advice of the Oyo State Director of Public Prosecutions (DPP).
Consequently, the court did not take the plea of the accused. Eyo, a teacher in a nursery and primary school, Bashorun, Ibadan, was arraigned on a count charge.

The prosecutor, Sgt. James Oriola, told the court that the accused had unlawful carnal knowledge of the pupil between September 2016 and Jan. 19, 2017.


Oriola said: “Eyo, being the class teacher of the girl and also her lesson teacher, lured the girl after lesson period and had carnal knowledge of her.’’

He said that the accused committed the offence at 4:00p.m. at the school premises.

The case was adjourned to Feb. 27 for mention.
Posted by dubem naija blog at 4:54 pm