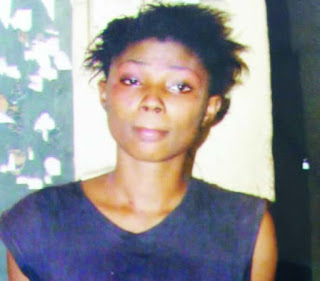 A female suspect in the custody of the State Criminal Investigation and Intelligence Department, Yaba, Lagos State, has been taken by the police to the Federal Neuro-Psychiatric Hospital, Yaba, to determine her state of health. The suspect, whose name had yet to be ascertained, was arrested after two missing siblings were found with her in Ojuwoye Market, Mushin.


It was learnt that the suspect had been creating confusion at the SCIID.

She was said to have stripped naked on numerous occasions, including the times she was taken out of her cell to give her statement to the police.


It was gathered that she also attacked other suspects in her cell, which made the authorities at the SCIID to move her to a solitary cell.

A source at the SCIID told a Punch correspondent that at the solitary cell, the suspect continued to strip herself naked and was fond of dancing with vigour.

“Since the time they brought her, she had been misbehaving. We initially thought she was putting up a show, but we discovered it was not ordinary.

“She could dance from morning till night although nobody heard the music she was dancing to. She would suddenly remove her clothes, sometimes tearing the clothes off her body.  We have tried to take her statement many times, but each time, she stripped herself naked. We usually had to force her to wear the clothes.

“We had to isolate her in a cell so that there would be peace.

“She eats like elephant and as soon as she wolfs down her food, she would start dancing. If you don’t give her food, it is another problem. If you ask for her name, she will give you more than three names in a second. She had claimed to be Ganiyat, Cynthia, Sola, among other names,” the source added.

It was gathered that the police at the SCIID decided to take the woman to the neuro-psychiatric hospital to determine whether she was acting or her ailment was real.

Punch Metro learnt that doctors at the hospital, after reportedly ascertaining that she was mentally unstable, told the police to bring her back on Thursday, September 15, for a proper test.

Another source told a Punch correspondent that the policemen at the SCIID decided to look for her family, but their efforts had been abortive.

She said, “It was as if she dropped from heaven. Nobody has come to look for her. We went to where she was arrested, but nobody knew where she came from. The suspect has refused to supply any information. She has been busy dancing and making a nuisance of herself. If her relatives show up, we may release her to them for proper care. If not, she will be charged to court and the court can determine her fate.”

Punch had reported last Monday that the suspect was mobbed while allegedly attempting to flee with two siblings, identified as Hammed Rasheed (6), and Farida Raheed (2).

Their mother, Simbiat, was attending to a customer when the suspect took them away.

It was reported that the suspect, who is about 22-year-old, would have been lynched but for the timely response of policemen from the Olosan Police Division.

The case was subsequently transferred to the SCID.
Posted by dubem naija blog at 11:16 am