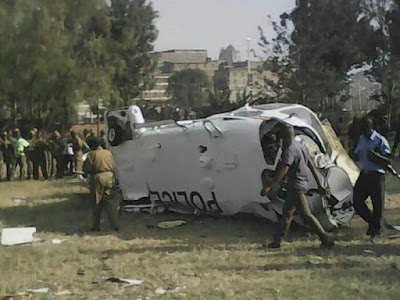 A police chopper bought at more than Sh680 million crashed Thursday evening, leaving four police officers on board seriously injured. The chopper was overflying Mathare slums when it crashed within the National Youth Service field at about 4pm. The chopper which was unveiled in April this year at the National Police Service Airwing was badly damaged. Police said the four officers on board were on routine patrols in the city when the incident happened.

Officials said there were three officers and an engineer from the manufacturing company- Augusta Westlands, an Italian Company.

Those at the scene said the pilot tried to make a hard landing on the field when it went down headfirst before landing on its back.

This is the second police chopper to crash in less than a month.


A Bell type chopper crashed within Wilson Airport on August 22, injuring two including an instructor.

When the second one crashed Thursday, senior police officers led by Nairobi police boss Japheth Koome and head of police airwing Rodgers Mbithi rushed to the scene and ordered the area be cordoned.


It was not immediately clear what caused the incident.

This incident leaves the police without an operational chopper. The chopper from Augusta Westlands, an Italian Company had boosted police operations in the country with even some politicians booking it for their political trips.

It had increased the capacity and improved police ability to quickly move troops to any trouble spot and generally improve their mobility.


The crashed chopper had a capacity of 15 passengers and could take off and land on autopilot.

The Augusta Westlands, an Italian Company was paid Sh683 million in the 2014/2015 financial year for the helicopter that can cruise up to 300kph.

Interior Cabinet Secretary Joseph Nkaissery praised the chopper as the best for the police service when it was unveiled.

As part of the deal to acquire the chopper, 10 pilots and six engineers were trained for three months at the manufacturer's headquarters in Italy.


The chopper is a twin-engine helicopter that has an endurance of six hours, which means it can remain airborne for at least six hours without refueling. It has a capacity for a vertical takeoff with just one engine with a full load at high altitudes.