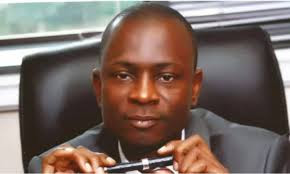 A cousin to former President Goodluck Jonathan is in fresh trouble for alleged security threat. Armed soldiers yesterday sealed off the construction site of Kakarta Civil Engineering Limited owned by Azibaola Robert for sharing a boundary with the Lungui Barracks of the Nigerian Army on the Kubwa/Asokoro Expressway, Abuja.
Azibaola, his wife, Stella and their firm are currently on trial over alleged payment of $40million into the bank account of one of their companies, One Plus Holdings Nigeria Limited, by the Office of the National Security Adviser (ONSA).

The EFCC has traced the source of the $40million to a bank in London. The cash was allegedly wired through Citibank N. A. Canada Square Canary, Wharf London E 145 LB into the account of One Plus Holdings Nigeria Limited.

It was gathered that the Kakarta Civil Engineering Limited site was allocated to Azibaola by the last administration.
The company is providing engineering infrastructure for the Maitama Extension District in Abuja.

The army, The Nation gathered yesterday, is uncomfortable with the site sitting so close to the Lungui Barracks.

The army is said to be particularly worried by the blasting of rocks and crushing of granite near the barracks, claiming that terror sect Boko Haram could take advantage of the site to attack the barracks.

Sources said that the administration of ex-President Jonathan ignored the fears raised by the army prior to the allocation of the land to the company and proceeded to give the go ahead following a strong recommendation from the Federal Capital Territory Administration (FCTA).

The new official residences of the Senate President and some principal officers of the National Assembly as well as other highly-placed Nigerians are located in the affected Maitama Extension District in Abuja.

The site is being used as a base for the coordination of the provision of services for the owners of plots in the District.

Soldiers who were drafted to the site at about 8pm on Friday, sealed off the site yesterday, preventing workers from entering the construction site.

The soldiers said they were “acting on orders from above.”

The Nation
Posted by dubem naija blog at 7:52 am