Housewives bathe each other with hot water over lover 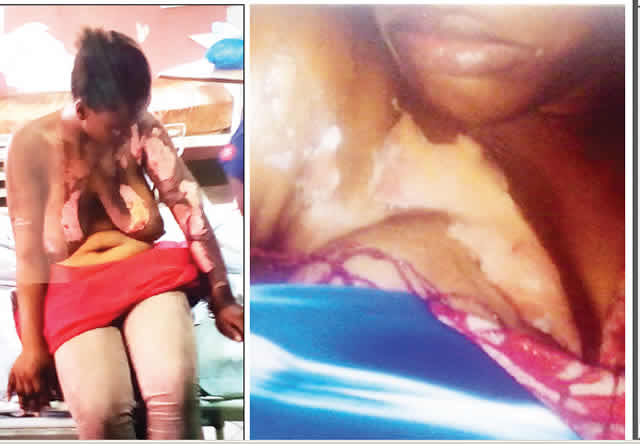 Two housewives, identified only as Muyibat and Biliki, have suffered severe burns after a fight over a man.Biliki, who was living with her husband in the Surulere area of the state, relocated to her parents’ house in Abule Oja, Yaba, in 2015, after separating from the husband.Muyibat lives with her husband and three children in the house.


According to PUNCH Metro,the two women emptied a kettle of hot water on each other during the brawl which occurred at their residence in the Yaba area of Lagos State.
It was learnt that, 32-year-old Biliki accused Muyibat, 29, of marrying her former boyfriend, which caused bad blood between them. Matters, however, came to a head after a disagreement on Saturday when the duo poured hot water on each other.They were both admitted to a general hospital in the state.
Muyibat told PUNCH Metro that their problem started after Biliki accused her of marrying her (Biliki’s) boyfriend.
She said,

“Biliki told neighbours that she once dated my husband and that she aborted for him during their relationship.She calls me Iyawo Sara (free wife).  I have never known peace in that house. She fights me over every minor issue.On Saturday, I went to the market with my husband and when we got home, my child started crying.Biliki’s younger brother, Ahmed, came out and shouted at him and I cautioned him.His sister then picked up a quarrel with me and started raining curses on me. I did not talk because I was observing a fast. While she was abusing me, I sneezed and said, ‘Ausubillahi minashaitani rojeem’ (God, deliver me from the devil).”

Muyibat said Biliki, who is also a Muslim, thought she was referring to her and queried her for calling her a devil. She alleged that Biliki attacked her in the process.

“I removed the water I was boiling for my vegetables and put it on the table. She (Biliki) held my head from behind and poured the hot water on me.
“Her younger brother slammed a plastic paint on my head, while she drew my hair. Both of them assaulted me,” Muyibat added.

The Kwara State indigene said she was rushed to a private hospital where she was rejected, adding that she later went to the Sabo Police Station to report the case. Muyibat, who claimed to have passed out on the way to the general hospital, said Biliki had earlier in May threatened to pour acid on her.
However, Biliki, who suffered burns on her breasts, chest and hand, denied the allegations, saying her neighbour was the first to attack her.
She denied ever dating Muyibat’s husband, saying Muyibat was fond of making trouble with her and efforts to reconcile them had always been rebuffed by her.

She said, “I went back to my parents’ house when I had issues with my husband. Because of that, many of the tenants started ridiculing me. “I was ill that Saturday and was sleeping beside my baby. Her child had come to play with my baby when she called him back. When the child didn’t heed her call, she hit him and the child started crying.

“Another child passing through the passageway was also crying that partcular time. My younger brother asked the other boy to stop crying and Muyibat abused my brother.

“My brother reported her to me and I told him not to reply her. She then started insulting me. We fought and our neighbours came to separate us.
“I was backing her when somebody suddenly shouted, ‘hot water!’ As I turned back with my hands raised, she emptied a kettle of hot water on me. Because my hand was raised when she attacked me, a little of the water splashed on her.”

Biliki said Muyibat also bit her brother while the latter came to separate them, adding that her two phones were smashed by Muyibat.
The Director of the Lagos State Office of the Public Defender, Mrs. Olubukola Salami, described the incident as horrific.
The Lagos State Police Public Relations Officer, SP Dolapo Badmos, confirmed the incident.
She added that the victims were both given medical papers for treatment, but they had yet to report back to the station.
Posted by dubem naija blog at 8:26 am