Another twist in the Dasuki Corruption case 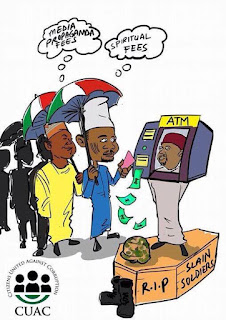 Ibrahim Idris Wambai, the former Accounts Officer II, has revealed that that the Office of Nigeria’s former Vice President Namadi Sambo was on a monthly stipend of N20million from the Office of the National Security Adviser (ONSA) led by former NSA, Sambo Dasuki.He pointed out that some presidential aides also benefitted from slush funds from the ONSA, singling out five firms which were used as platforms by some people to receive funds from the office.

Many prominent Nigerians and leaders similarly drew huge funds from the office.

Records of all cash payments to such individuals and organisations are still intact, he said in a Statement of Witness/Accused Person which was filed by the Economic and Financial Crimes Commission (EFCC) in the High Court of the Federal Capital Territory and obtained by The Nations newspaper.
Posted by dubem naija blog at 8:46 am