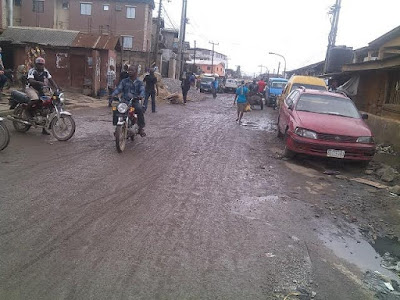 Pandemonium broke out in Mushin, Lagos state yesterday after 4-year-old girl, Nimota Adebowale pushed a needle into the right eye of her 5-year- old friend, Fausatu Majekodunmi while they were playing in their compound along Agege Motor Road. Nimota and Fausatu's parents are good neighbors in the same compound and also have children who cherished each others company.While the two little girls were playing yesterday, Nimota carelessly drove a needle into her friend's eye. According to Leadership, Nimota’s mother rushed Fausatu to a nearby hospital where doctors battled in vain to cure the child but at the end she could not see with the eye.

A neighbor identified as Oluwashola, said both families have lived peacefully since they met in the compound. She said when the incident happened, as Fausatu was screaming, Nimota was also shedding tears. She said Nimota’s mother quickly rushed the victim to a nearby private hospital but they were referred to another hospital. She said the existing relationship between both families made them handle the matter amicably.
Posted by dubem naija blog at 3:09 pm