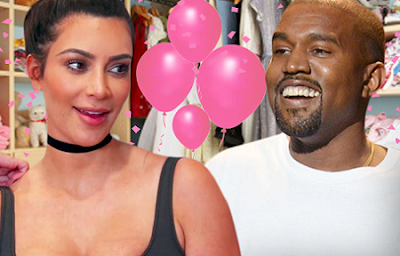 Kim Kardashian and Kanye West are having a baby girl TMZ has learned. Sources familiar with the pregnancy tell them, the couple's surrogate is carrying a female bundle of joy. Recall they were the first to break the news, that the couple's 3rd child will be due in January? Kim's placenta accreta condition could kill her if she carries another baby to term, so they hired a surrogate. And now it has been revealed it is a baby girl.
This will be girl #9 in the Kardashian clan - not including Kris herself.

The website also went ahead to speak with a notable child psychologist, who tells them North West
and baby #3 will probably form a closer bond than Saint might with his new sis. And the reason's simple: sisters gravitate to their sisters, well in all families.
Posted by dubem naija blog at 1:07 pm