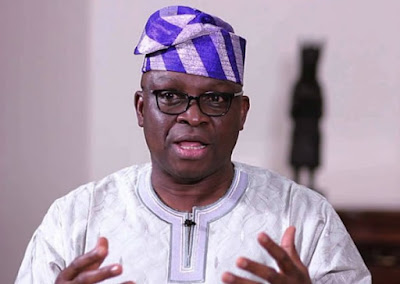 Ekiti State Governor, Ayodele Fayose, has described the Rivers National and State Houses of Assembly election rerun as disgraceful, asking the United States President-elect, Donald Trump, to quickly intervene in the affairs of Nigeria. Fayose said this in a statement by his media aide, Lere Olayinka, on Sunday. The governor said President Muhammadu Buhari had compromised the Independent National Electoral Commission and taken Nigeria backward.The statement read in part, “He (Fayose) reiterated his call to the United States of America’s President-elect, Mr Donald Trump, to focus his attention more on Nigeria, with a view to saving the country from disintegrating, saying; ‘God forbid, if Nigeria disintegrates, the entire continent of Africa will disintegrate’’’.Fayose described the elections as a sad reminder of the level of destruction already done to the country’s electoral process by the All Progressives Congress. He added, “Free, fair and credible election is dead in the country and that whatever victory that is recorded by any political party in the Rivers State election will be nothing but victory at gunpoint.”The governor lamented that it was worrisome that the legacy of free, fair and credible election left by the Peoples Democratic Party had been destroyed less than two years that the APC assumed power,saying; “We thought that we have gone past this era of manipulated electoral process after the 2015 general elections, which brought the APC and President Buhari to power, but the Buhari administration has taken us back to the stone age by merging his party, APC with INEC, the police, military and other security agencies.”The governor said it was sad that snatching of ballot boxes, hijacking of voting materials and electoral violence which had become a thing of the past have now become part of our electoral process.“It is even more worrisome that despite the fact that votes are counted openly at the polling units, voters are no longer sure of the results of elections until announcement by INEC, which has become an organ of the APC,” the governor said.

Posted by dubem naija blog at 9:17 am