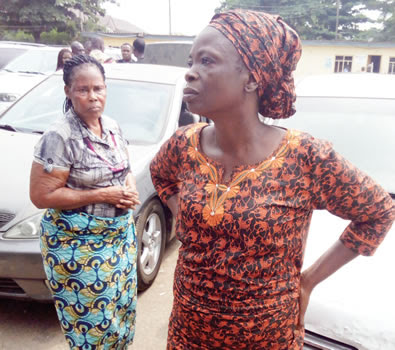 A pastor at the Divine Yard Deliverance Ministry in Iyana Iyesi, Ota, Ogun State, Peace Udoh, has been arrested by the police for allegedly running a baby factory in the church. The 47-year-old was said to have sold 64 babies before she was arrested on Sunday by operatives from the Lagos State Police Command who acted on a tip-off.

Udoh was apprehended with one Angela Akpan and a nurse, Mrs. Bukola Ajala, who reportedly assisted in childbirth at Udoh’s church.

PUNCH Metro learnt that the pastor usually referred complicated cases to the nurse, whose clinic – El Shaddai Hospital – is located a few metres away from the church.

Our correspondent gathered that Angela’s younger sister, 17-year-old Goodnews Akpan, recently gave birth to a child at the clinic.

Angela, who was arrested on Saturday in the Sango area, was said to have led police operatives on Sunday to Udoh’s church and Ajala’s clinic, where they were picked up respectively.

While parading the suspects on Monday at the Lagos State Police Command headquarters in Ikeja, the Commissioner of Police, Fatai Owoseni, said detectives swooped on the syndicate after receiving intelligence report that Udoh needed a buyer for Goodnews’ baby.

“The suspects run a baby factory in the Sango Ota area. We are still working to get 64 other children she has sold out,” the CP added.

However, the pastor, who hails from Akwa Ibom State, refuted the allegation, saying she used the church as a maternity home to assist her pregnant church members for a token.

She said, “I have been a pastor for 13 years. I only assisted my church members during childbirth. I take delivery of 13 to 15 babies every year and I have handled over 60 cases so far. I don’t sell the babies.

“Whenever I have a complicated case, I refer the patient to the nurse and we share the money she collects for the service. Angela brought her sister to me in July. She gave birth on November 16 at the nurse’s clinic and she was discharged. I was surprised when the police came to arrest me yesterday (Sunday).”

Ajala, the nurse, said she collected between N15,000 and N17,000 for each child delivery, adding that she didn’t know anything about selling of babies.

The third suspect, Angela, said, “I am from Abak in Akwa Ibom. I took my sister from our village to the pastor when her pregnancy was four months.

She was there until she gave birth in November and I paid N17,000. I didn’t intend to sell her child and I have never sold any child before.”

Goodnews, a secondary school dropout, told our correspondent that she was not aware of the plan to sell her baby. She said she followed Angela to Lagos to avoid being ridiculed in the village.

“I got pregnant in the school but none of my boyfriends was willing to take the responsibility for the pregnancy.

“My mother would not allow me stay with her so I decided to follow my sister to Lagos,” she added.
Posted by dubemnaija at 8:51 am