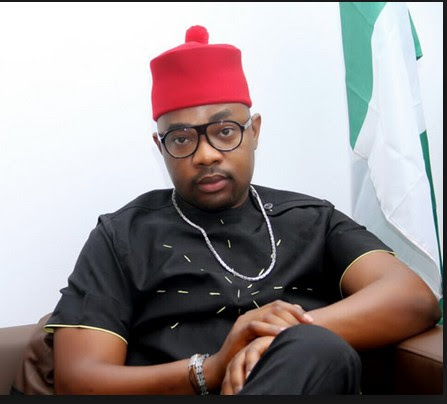 The Department of State Service (DSS) has arrested an aide to senate president Bukola Saraki over alleged plots to cause public disturbance in Abuja during the festive period. The Nation reports that Ikenga Ugochinyere, a special adviser to the senate president on youth matters, was picked up by operatives of the secret police on Thursday, December 22 who stormed his Abuja office.

A source said the operatives arrived at the office in four unmarked Hilux trucks at around 2am on Thursday and broke into Ugochinyere’s office, carting away several documents and arresting the aide himself. The DSS then barred anybody from entering into the premises.

The Nation quotes, Ohazuruike Tochukwu, a member of the National Youth Council of Nigeria of which Ugochinyere is national president, as saying that Ugochinyere was arrested along his driver and secretary.

He said: Armed security men suspected to be from DSS in the wee hours of Thursday invaded the office at Suit 29, Shaki Plaza area, 11 Garki and whisked away Barrister Ugochinyere, his driver and Secretary to unknown destination.

This is the private law firm of the National President of NYCN.

This place was invaded by DSS by 2am this morning, while the National President and some workers were inside this place.

The security men guiding this place called us that some DSS men were here and they broke the place and took away the National President, his driver and secretary, Oguchukwu.

The security men guiding the plaza said men wearing SARS uniform also came by 6 am after the DSS had left and warned them that no one should enter the office.

I spoke with Ugochinyere through his driver and they confirmed it was the DSS that arrested him.
Posted by dubem naija blog at 8:32 am