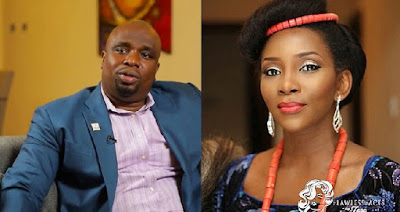 Nollywood star Genevieve Nnaji got embarrassed in far away Milan as she watched her only chance of getting married walk out the door after her secret lover called off their wedding at the last minute.

The pretty Nollywood single mother sparked off a secret romance with Ugochukwu Udezue, a wealthy NBA basketball agent based in Denver Colorado last year, where he proposed to her around the time she was seen flaunting a huge engagement ring on her official Instagram page.

37-year-old Miss Nnaji and Mr Udezue were supposed to get married in Milan Italy about two weeks ago, same time as her colleague, Funke Akindele but the groom cancelled the wedding at the last minute and returned to Amsterdam, leaving the actress and her guests in shock.

Udezue had reportedly told his friends that he doesn’t trust Miss Nnaji after she chose to make the wedding private, his father had also refused attend or give his blessing because of Genevieve Nnaji’s suspicious demand of not wanting close family members at the wedding.

Months before the wedding, Genevieve Nnaji had begged Udezue to keep the wedding ceremony a low-key one. She even went as far as not telling any member of her family nor her colleagues and only left Nigeria with her best friend Oluchi Orlandi and few other friends.

The founder of African Basketball league, Mr Udezue thought Miss Nnaji has something to hide that was why she didn’t bother to invite her parents to the wedding ceremony scheduled for Milan, this and his father’s refusal forced Mr Udezue to call off the wedding.

Gene as she is fondly called waa forced to return to the country in shame without the wedding ring she’s been dreaming of. Mr Udezue, who is one of the most popular Nigerian NBA agents in the United States, has four kids from his previous marriages.

Its still not sure if Genevieve who is currently in Canada for TIFF has called off her romance with the basketball agent.
Posted by dubem naija blog at 5:10 pm