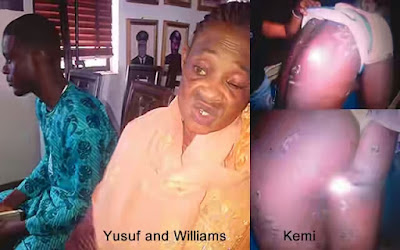 A woman, Fatima Williams, and her neighbour, Waliu Yusuf, have been arrested by the Lagos State Police Command for allegedly brutalising a 16-year-old girl, identified only as Kemi, with a hot iron and electric cables. Punch correspondent learnt that the Kemi was brought from Cotonou, Benin Republic. She had been reportedly living with Williams, popularly called Alhaja, since January 2016 as a housemaid.
Williams’ apartment is on Soji Adepegba Close, Allen Avenue, Ikeja. It was gathered that the victim was allegedly tortured for not sweeping Williams’ compound last Thursday.


Punch Metro learnt that a resident informed the police and the suspects were arrested by the Ikeja Police Division on Friday, August 12.

A police source told Punch correspondent that the teenager had been admitted to the Police Cottage Hospital, Ikeja.

Kemi, who spoke with Punch correspondent in Yoruba, said, “On that day, Alhaja instructed me to sweep the compound. She also asked me to clean the windows and wash some clothes.

“I started with the washing and she went out. When she returned, she was angry that I had not swept the compound. She called the man to beat me up.”

Alhaja, a mother of four children who hails from Kwara State, said she got Yusuf to beat the girl for her obstinacy, adding that Kemi’s stubbornness had increased her (Alhaja’s) blood pressure. She said, “The girl’s brother brought her to me on January 10, 2016. She usually stole things from the house. I kept reporting her to her brother and even asked him to come to pick her, but he refused; I got tired of the girl.

“She continued her rudeness and messed up the whole house. She also urinated on the bed. During all this trouble, my blood pressure got high. I had to use a BP machine in the house. I called and spoke to her like a child, but she would not listen. I usually gave her the food I ate. I gave her brother N40,000 in January.

“When she got me angry on that day, I was tired of beating her and I called Waliu (Yusuf). He was using an iron. As he beat her, she held his clothes and the iron injured her.”

Twenty-five-year-old Yusuf said he had wanted to scare the victim with the iron when it injured her.

He said, “The girl went into the kitchen and brought an insecticide, threatening to kill herself. I then tried to take the substance away from her. She began to struggle with me. I started flogging her and she held on to my clothes.

“Meanwhile, I was ironing some that time. I used the iron to scare her to leave my clothes. That was how the iron fell on her. I only wanted to scare her away.”

The state Commissioner of Police, Fatai Owoseni, who paraded the suspects at the command headquarters, Ikeja, said they would be charged to court at the end of investigation.

He said, “This is a case of child trafficking, child labour and child abuse as well as assault occasioning harm. The suspects will be arraigned in a court of law.”

Posted by dubem naija blog at 8:48 am