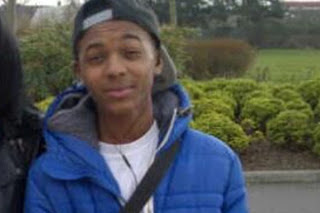 Three men have been charged with murder after a teenager was allegedly hacked to death by gang members “armed with machetes” in south London. Andre Aderemi, 19, was found covered in stab wounds with paramedics desperately trying to save the amateur rapper’s life.


Jamall Longergan, 19, of Woodcroft Road, Thornton Heath, Fabio Cela, 19, of Fryston Avenue, Croydon and Rodney Mukasa, 19, of Greenview Avenue, Croydon, have now been charged with the teen’s murder.
The young man was found about 7.40pm on Heather Way in Selsdon, South Croydon, after being stabbed to death on Tuesday August 16.

Despite the frantic attempts of paramedics, the teenager died in hospital. They have since been charged with murder, appearing at Camberwell Magistrates; Court on Saturday.

Witnesses claimed the teen was “stabbed 20 times” after being chased in the Monks Hill estate in Selsdon, Croydon last night.

He was heard screaming for his mum before he was killed.
Posted by dubem naija blog at 1:42 pm