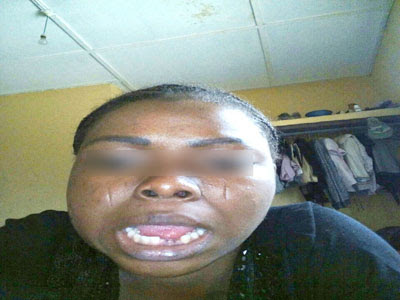 Two weeks after the story of the female corps member Temitope Adedewe, who was battered and her two teeth removed with a hammer by a male corps member broke, the National Youth Service Corps headquarters Abuja is yet to officially respond. Also her NYSC discharge certificate, which was withheld for purportedly breaching the NYSC code of conduct and reporting the matter to the police in Arochukwu, Abia State, where the incident  happened, is yet to be issued to her.


This is despite a strong allegation that her assailant, Oluwabusiyi Adeola Bolarinde is already studying for his master’s degree at the University of Ibadan, which could not have been possible if he didn’t produce his NYSC discharge certificate.

The corps’ Director of Public Relations, Mrs. Abosede Aderibigbe was not available for comments on the issue. Efforts to reach her on phone were also abortive, as her phones were switched off and she did not respond to text messages.

A source at the Welfare Department in Abuja, who spoke to our correspondent on condition of anonymity, however, admitted that they are aware of the case and have started looking into it. He said steps are being taken to resolve the issue, and that a concrete decision is expected to be reached on the matter next week.

Our correspondent in Abia State, who visited the NYSC Zonal Office in Umuahia, reported that a source, who does not want to be quoted, told him that the matter has been taken over by the national office in Abuja.

He said an investigative team had visited the zone from Abuja on a fact-finding mission and promised to respond accordingly soon. The source therefore concluded that the case, as it is, has left their hands and pleaded that the public and all stakeholders in the matter wait for an official response from the national office. Meanwhile, the victim of the battery, Miss Adedewe told our reporter that she is yet to get any concrete information from the Abuja office or anywhere.

According to her, she only got a call from a lady, who claimed to be of the NYSC Abuja head-office. The caller who initially did not reveal her identity or position later gave her name as Benedict E. She refused to reveal her official position and requested the aggrieved ex-corps member to come to Abuja to tell her side of the story, since they have commenced investigation on the matter.

Miss Adedewe said the lady told her they had visited the Abia State Zonal office in Umuahia and the venue of the incident in Arochukwu on a fact-finding mission. She said while there, they had asked Mrs. Akuma, one of the zonal office’s staff and a principal player in the issue to send for her and that she said all attempts to reach her from Umuahia had failed.

Adedewe however revealed that she never got any call or messages from Mrs. Akuma. She also said the purported caller from the NYSC behaved in a suspicious manner by refusing to disclose her identity incomplete.

However, Mrs. Busayo Obisakin, facilitator of Women’s Inspiration Development (WID), the NGO that had originally taken up her case and petitioned the NYSC, advised her not to make any trip to Abuja but to insist on telling her side of the story on phone.

She also told our reporter that the caller directed her to stop any media attention on it as they are already looking into the matter because they understand her plight.

Posted by dubem naija blog at 8:29 am