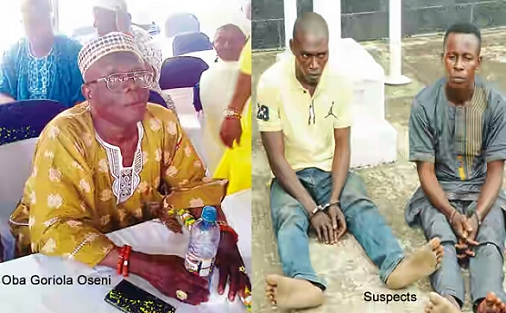 The Oniba of Iba community, Oba Goriola Oseni, who regained his freedom from kidnappers on Saturday, says he ate concoction prepared with bitter leaves while in captivity. The monarch told Punch Metro in his palace on Sunday that he slept in a shanty built on water during the 21 days he was in captivity.
This is just as two of the suspected kidnappers said they collected N15m from the monarch’s family, adding that the money was collected in two batches.  The state Governor, Akinwunmi Ambode, who also addressed newsmen after the parade, said the government would continue to intensify security in the state.

Oba Goriola was abducted in his palace at about 8.30pm on Saturday, July 16, by some gunmen suspected to be Ijaw militants who attacked the community in two speedboats.

On Saturday, however, at about 7pm, the monarch returned to the palace, accompanied only by community youths who sighted him after he came out of a boat he had paddled.

Goriola told one of Punch correspondents that when the negotiation for ransom initially fell through, the kidnappers forced him to sleep on the floor for days and exposed him to mosquito bites.

He said, “On that Saturday, at about 9pm, I was listening to news in my bedroom when I heard gunshots.

“When I came into the sitting room, the gunmen were shouting, ‘This is the king’. I was in shorts and was about to enter a bathroom. They killed my palace guard, carried me into their speedboat and drove away into a swamp.

“The kidnappers asked if I had seen them before or we had done business before and I said no. They told me while driving away that they were contracted to kill me, but they had changed their mind. They said I should cooperate with them. I told them they should rather cooperate with me and treat me like their father.

“The hideout was a shanty built on water. There were about six shanties on the water. They covered my eyes while we were in the speedboat. I fainted at a point, but they still dragged me.

“When we got there, they allowed me to take my bath. On Sunday, they assured me that they would take me back to the palace. Around 5pm on the third day, they called my family members. They were Ijaw youths; they spoke the language and prepared bitter leaf concoctions, which we ate.
Any time they brought up the matter of ransom and my family members begged them, they would start arguing in the shanty. They would carry guns and start threatening me. But their boss instructed them not to manhandle me.”

Goriola said after the first ransom was paid, the gang split into two and a fresh ransom was demanded by the new group.

He said, “My children paid the first ransom. The ringleaders among the kidnappers spent the money and did not share it with the other members and they became angry. One of the ringleaders said he was going to the city and asked what he should buy for me. I asked for sausage roll. I did not know he was running away.

“On the second week, about 12 gunmen showed up and said they would now start a fresh negotiation. They said if my children did not cooperate, they would abandon me in the creek and run away. They maltreated me and made me sleep on the floor. They removed the mattress and the bedspread.”

The monarch explained that the kidnappers brought out idols and made him swear he didn’t have more money than he claimed.

He said later, some of his family members brought the second ransom, adding that despite the payments, he was made to sleep on the floor and was bitten by mosquitoes.

He said, “When they eventually got both ransoms, they asked me to go. They brought me in a speedboat. When they heard one of them had been arrested by the police, they said they would take me back to the creek and I persuaded them not to, saying I would tell the police to release the suspect; they agreed.

“When they got halfway, they said the boat was faulty and asked me to find a canoe for myself. I found one by the bush and got into it. I paddled myself to the land.

“When I came to an expressway, I saw some youths playing football. They seemed not to know who I was. I asked them which way was to the king’s house. When I crossed the road, some youths saw me and ran to embrace me.

“I told the gunmen in the creek that it was God who permitted them to kidnap me, because I am not an easy prey. I told them I was putting on only shorts and that was why they could abduct me. And they said they knew.”

The monarch’s son, Saheed Oseni, told Punch Metro on Sunday that the money paid to the kidnappers was sourced without the involvement of the state government.

Saheed said the traditional ruler was hale and hearty, adding that the family was grateful to God for his safe return.