US Presidential Candidate, Ben Carson is Coming to Nigeria 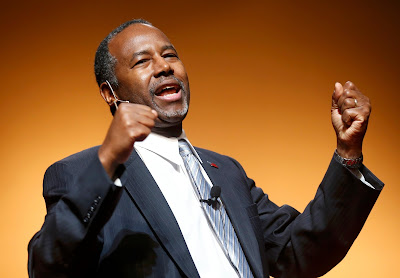 In his latest effort to beef up his foreign policy credentials, Republican presidential candidate Ben Carson announced Monday he's traveling to Nigeria, Kenya and Zambia at the end of this month. "I think a lot of our policy in the future is going to affect Africa," Carson said on the conservative Hugh Hewitt radio show.

He added that he chose those three countries in particular "because my ancestors are from the Kenya-Tanzania region, the Turkana tribe."

"To Nigeria, I want to get an idea from the people what the effects of Boko Haram are, what people are thinking, to see what the economic situation is there, and also there's a medical school there named after me which I want to visit," the retired neurosurgeon continued. "And Zambia, because the twins, the Banda twins are there. We separated them. They were joined at the top of the head facing in opposite directions almost 18 years ago, and this is the year they graduate from high school."
The announcement comes just over a week after Carson visited a Syrian refugee camp in Jordan.
In the past month, as concerns over the fight against ISIS and related matters have gained more attention, Carson has struggled to discuss foreign policy. His campaign has acknowledged that international affairs has been a weak spot for Carson, and they hope to rectify this with his trips abroad.

Carson will leave for Africa on December 27 and will be there for about a week. Witnessing foreign policy issues firsthand "makes a difference," Carson told Hewitt. "I think we need to make decisions based on real information as opposed to filtered information."