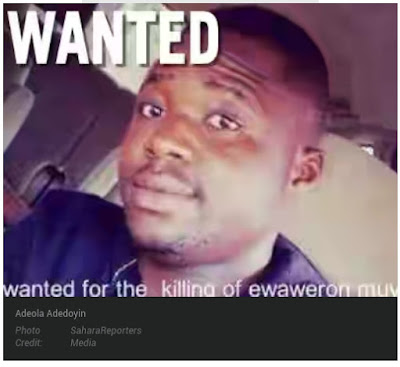 Students of the Adekunle Ajasin University Akungba Akoko (AAUA) have asked the institution’s authorities to investigate the circumstances that led to the untimely death of their colleague, Ewaworin Oluwamuyiwa, or face a student uprising. The students allege that a university paramilitary organization, known as the Cadet Corps, beat Mr. Oluwamuyiwa, a 400 level final year student of the Psychology Department, to death on campus.
On Monday, several students close to the deceased informed SaharaReporters that a leader of the Cadet Corps, Adeola Adedoyin (AKA “Iron Body”), commaned the squad responsible for torturing Mr. Oluwamuyiwa to death.

"Oluwamuyiwa was already sleeping when Adedoyin, known as 'Iron body', led his gang of Cadet Corps members into Shanghai Villa [the residency of Oluwamuyia] and asked for the room of Oluwamuyiwa. A resident pointed out the room to Adedoyin," according to a student statement.

“The next thing we heard was the Cadet Corps banging on the late Oluwamuyiwa's door while they shouted on top of their voice that the young man should open his door or they would force it open," they added.

The cadet gang forcefully gained entrance into the room and bounced on top of the victim whom they beat angrily until blood started gushing out from his body," the student source explained.

Since knowledge of his involvement in the murder of Mr. Oluwamuyiwa became public, Mr. Adedoyin has been on the run. Several students accused the top management of the university of harboring the fugitive. These students threatened to organize a massive protest if Mr. Adedoyin was not found soon by the authorities.

SaharaReporters gathered that shortly after the gang left, Mr. Oluwamuyiwa was found in a comatose state and gasping for breath inside his room. He was immediately rushed to the Iwaro General Hospital by his co-residents.

"From Iwaro General Hospital, his condition worsened and the doctor on duty advised that he should be transferred to another hospital in Ondo town. He was subsequently rushed to the University Teaching Hospital in Ibadan. A surgery was carried out, but he succumbed to his wounds," a student source said.

The news of the late Olumuyiwa's death went viral on social media and is currently generating lots of controversy among the student community.

A few students recalled that the Cadet Corps once threatened the deceased during a show organized by the university. Students alleged that several Cadet Corps members promised they would “treat his Bleep-up”.

The Department of State Security Services (DSS) informed SaharaReporters that they began an investigation into the murder. University management declared the supposed perpetrator, Mr. Adedoyin, as wanted for his involvement in the incident.

Speaking on the phone with SahararReporters, the Dean of Students Affairs of the University, Bolanle Ogungbamila, said the Cadet Corps would be effectively banned until university management can investigate the cause of the incident.

"The organization [Cadet Corps] will remain banned while the university management investigates the situation. We are on top of the situation and we have advised our students not to take the law into their hands, they should remain calm until the school authorities investigate the matter", he said.

In a statement forwarded to SaharaReporters, the Student Union Government (SUG) of the institution called upon Mr. Adedoyin to surrender to the Nigerian Police Force. The state was jointly signed by President, Odunyemi Adegbola, General Secretary, Segun Odunayo, and Publicity Secretary, Lanre Ikuejuroje.

"The cadets' base is declared locked down by the union [SUG] until further notice. We advise Mr. Adeola Adedoyin to surrender himself to any nearby police station or risk being arrested by men of the Nigerian police force," the statement read in part.

Posted by dubem naija blog at 9:42 am