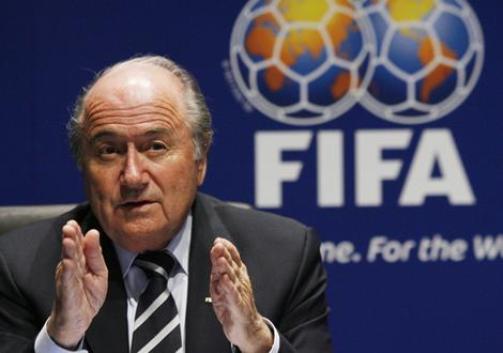 Suspended FIFA president Sepp Joseph Blatter has openly declared his support for former Abia state Governor Dr Orji Uzor Kalu to occupy the exalted position of FIFA President, even as he has faulted the candidature of former Secretary General Jerome Champagne and Prince Alli of Jordan.

Speaking in Zurich, Blatter said ” The position of the FIFA president is too important to be left to just anybody. I have heard of some candidates who want to take over from me. But I find the Businessman from Nigeria Kalu very qualified and interesting because he is not only a businessman, but a politician with lots of contacts and corporate experience. He can bring his great experiences to bear in the running of world football.

He is passionate about the game. I remember how he sponsored one of Nigerian clubs to win the CAF championship twice. He is a man that can take world football to the next level”, Blatter told the Swiss Radio monitored on Sunday.

Blatter said though Kalu had not formally declared his interest, it was in the best interest of Africa to nominate him because of his deep passion for the game. “If Africa hopes to win the support of other federations, then they must queue behind the Nigerian business man. Football has developed beyond just anybody taking over.

I sacked Jerome Champgne in 2010 so how can he come back to lead an Association he tried to destroy. You need a man who can command respect and win friends for football.

With Kalu Africa stands a better chance, he concluded. CAF is expected to meet next week to decide on a candidate for the election scheduled for next year. Orji Kalu and Segun Odegbami are the two candidates vying for the post from Africa.
Posted by dubem naija blog at 8:47 am