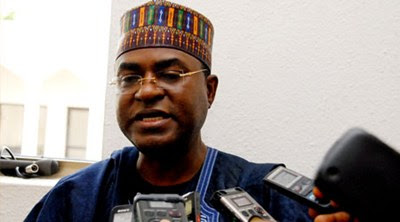 One of four wives of former governor Isa Yuguda of Bauchi State, Abiodun Yuguda, has described as a blatant lie the claim by the recovery committee set up by the state’s new government, that 22 government vehicles were recovered from Mr. Yuguda’s wives.


The new government of Mohammed Abubakar had set up the committee to recover government’s properties allegedly stolen by officials of the Yuguda administration.

The committee said 11 vehicles were recovered from Mr. Yuguda’s first wife, seven from Abiodun, four from the third wife, Marya, while the fourth wife, Nafisah, was out of the country as of the time the committee went to recover the vehicles in her possession.

But speaking with journalists from Abuja via telephone, Abiodun Yuguda expressed surprise that the committee made the claim.
According to her, as of the time her husband left office, the only car in her custody was a Toyota Camry.

“Let anyone who said seven cars were taken away from my house come out openly and tell the whole world the truth,” she said. Abiodun said before the expiration of his tenure, Mr. Yuguda instructed his wives to return the vehicles they were using while in office.

She said all the wives complied, and the vehicles, some of which she said were old, were taken to the Bauchi State government liaison office in Abuja, from where the cars were towed to Bauchi.

“I had a jeep, Toyota Camry, which I was not using and a pick up van with me when we were leaving office. These were even old vehicles bought before 2011. On the instruction of my husband, I returned them to the liaison office like my sisters, I mean the other wives, did.

“My Personal Assistant, Esther, had to even go and show them the cars that were bought in 2007 ,some which are not even movable, at the government mechanic place. Some cars that were bought in 2007 were being used in my NGO, CYDI office in Bauchi. They were being used to take the three disabled people who are working in m y office to and fro their houses and to carry all activities that have to with people with disability.

“When my husband asked us to return the cars, my PA went to my office in Bauchi and took the cars to Government House in Bauchi. No car was collected from my house. The only government jeep that I ever used was with the government mechanic in Abuja before my husband even left government. By the time my husband left I was already using a Mercedes jeep bought for me by my husband.

“I wonder why they claim seven cars were taken away from my house. I didn’t keep seven cars. If Governor Abubakar had any problem with our husband, why must he drag us, his wives, into it? As a governor’s wife, I was using only one jeep without any backup car. On many occasions I was stranded on the road when the jeep broke down. The Peugeot 406 that was with me as a backup had an accident and up till when my husband left office, no replacement was given to me.

“With every sense of righteousness, I can say that my husband, Isa Yuguda, is an angel. He has been affecting people’s lives positively and never allowed us to take anything from the government. CYDI was not funded by the Bauchi State government throughout the eight years my husband spent in office,” Mrs. Yuguda stated.

The former governor’s wife said that Mr. Yuguda did not allow any of his wives to enjoy the luxury of being married to a chief executive of a state.

She said that she never had any interest in looting Bauchi State government’s property or any other property, declaring that her wealth is the number of the less privileged she has been able to touch their lives positively.

“I don’t need any material gains. I have been helping people since when I was in secondary school and I will continue to do so for the rest of my life. My wealth is the number of the less privileged I touch their lives. So I don’t need Bauchi State government’s property.

“The governor lied against me to tarnish my image and those of my sisters. I am sure that the God Almighty I serve will judge him. He will only escape God’s judgment if those cars were taken away from our houses. What did he really want to gain in tarnishing other people’s image? He ought to know that he will not remain governor for life; he is going to leave the office one day.

“Let the governor and his committee know that power is transient. They are in office today, tomorrow they will be out of office the way we too left office for him. I will advise His Excellency, the new governor, to be praying to God for him to end well instead of tarnishing the image of innocent women. I don’t have any power but I have my God whom I serve and I know this God will judge between me and him,” she said.

source: premiumtimes
Posted by dubem naija blog at 9:16 am