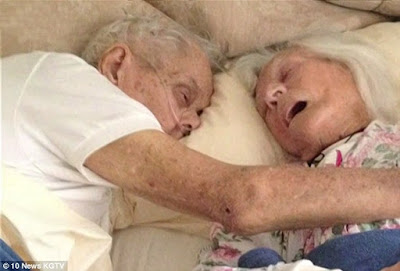 A poignant photo has emerged which shows an elderly couple who were married for 75 years fulfilling their final wishes to die together. Jeanette Toczko, 96, and her 95-year-old husband, Alexander Toczko, from San Diego, California, died just hours apart as they held hands in bed. The pair spent their lives in love after becoming boyfriend and girlfriend when they were only eight years old.

But several weeks ago, Mr Toczko suffered a broken hip in a fall and was left bed-bound. A local hospice delivered a special bed to his home, which staff pushed up next to his beloved wife's bed.
As Mr Toczko's condition quickly declined, Mrs Toczko's own health took a turn for the worse. The couple had always said they wished to die 'in their own bed, holding hands, in each other's arms'.


And in scenes reminiscent of the 2004 film The Notebook, they passed away while clutching hands earlier this month: Mr Toczko on June 17, as he lay beside his wife; and Mrs Toczko, the next day.
The couple's daughter, Aimee Toczko-Cushman, described the moment she told her mother she had lost her husband, who kept a photo of Mrs Toczko at her Holy Communion in his wallet. 'I told my mother he was gone,' she told 10 News 'She hugged him and she said, "See this is what you wanted. You died in my arms and I love you. I love you, wait for me, I'll be there soon".' 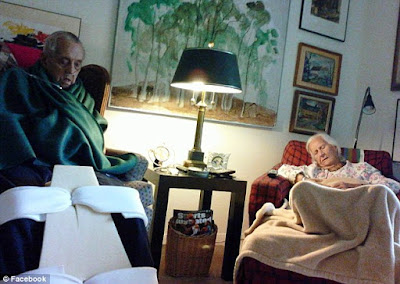 Mrs Toczko-Cushman, and the couple's other children, Donna Tang, Richard Toczko, Lynne Edwards and Andra Toczko, then left the room, to allow their mother to say a private goodbye.

And less than 24 hours later, Mrs Toczko herself passed away.

'Even the hospice nurse said it was the most incredible thing to see the two of them taking those last breaths together,' Ms Toczko-Cushman said of her parents, both born in Stamford, Connecticut.