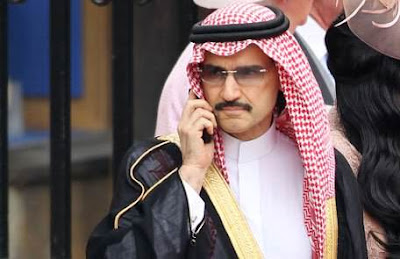 Prince Alwaleed who made billions investing in American, European and Middle Eastern companies is donating his $32 billion fortune to philanthropy, according to a statement released Wednesday.


Alwaleed said he wants his money to go to humanitarian causes after his death. The release did not identify specific efforts, but said the board of trustees at Alaweed Philanthropies, which he currently heads, will craft a plan to spend the money on initiatives related to healthcare, education and poverty.
“Philanthropy is an intrinsic part of my Islamic faith,” Alwaleed said in the press release. “With this pledge, I am honoring my life-long commitment to what matters most, helping to build a more peaceful, equitable and sustainable world for generations to come.”

Forbes ranks Alwaleed at the 34th richest person in the world. His major investments have included Twitter and Citigroup, as well as media companies like Time Warner (CNN’s parent company) and Disney.

The business magnate said he has already funneled $3.5 billion to his charity for initiatives such as housing, gender equality and disaster relief. Alwaleed Philanthropies has also established centers and programs at several prestigious universities, including Harvard and Cambridge and partnered with charities like the Bill and Melinda Gates Foundation.

Alwaleed’s press release from Wednesday quotes Gates saying, “Prince Alwaleed’s generous commitment promises to significantly extend the great work that his foundation is already doing.”
For those worried how he will manage if he gives away all his money, the prince will be holding on to his publicly-listed investment business.

“This is very much separate from my ownership in Kingdom Holding,” the prince said at the announcement. Kingdom Holding, of which the prince is the majority shareholder, has holdings in a number of businesses, including banking and financial services, property businesses, media companies and internet and technology firms. The prince has been married four times and has children.