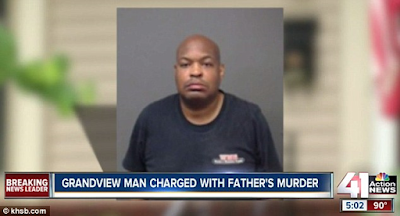 A Missouri man has been charged with viciously murdering his 74-year-old father, by lying on his head to prove how 'big and bad he was.' Kyle Webb, 44, allegedly killed his father, Franklin Webb, late Saturday night at the home they shared in Grandview, Missouri.
The father reportedly wasn't pleased with how his son was cleaning up around a leaky pipe and complained about it.
Infuriated with anger about his dad's complaints, Kyle Webb attempted to scare his dad by acting as though he was going to hit him with an empty vodka bottle, according to the police report.
The father tried to punch his son, but fell backwards in the process, hitting a kitchen chair before he fell to the floor. 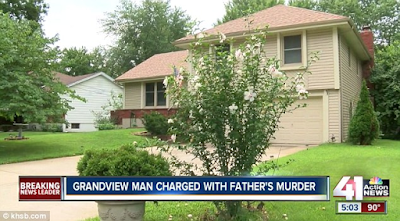 That's when Kyle Webb reportedly jumped on top of his father.
'I had to prove how big and bad I was,' Webb told police of attacking his father.
He told officers that he positioned his father's arm across his throat and then laid himself across his head as the man lay face down on the floor.

Police said that Webb sat on his father's head for up to 12 minutes because he wanted to 'prove a point' about being able to control his dad. He waited roughly three minutes before calling police after his father lost consciousness, the police report states. The elderly man was pronounced dead at an area hospital.
The Jackson County Prosecutor's Office has charged Webb with second degree murder and his bail has been set at $100,000.
After his father died, Webb told police that he wanted to take responsibility for what happened, saying several times, "It's on me."

Source: Mail Online
Posted by dubem naija blog at 8:07 am