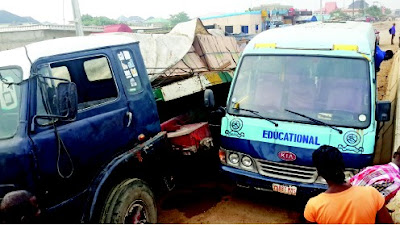 But for divine providence, the families of many pupils of a nursery and primary school in Okota area of Lagos State could have been thrown into mourning by now. A truck plying the pothole-riddled Ago Palace Way, Okota, lost control and hit a school bus that was conveying pupils to school. The incident happened on Tuesday.


An eyewitness told Daily Sun that the truck was trying to avoid some other tankers that were parked along the road, thereby narrowing it to a single lane. In the process, the truck hit the school bus that was filled with children on their way to school.

According to him, as a result of the accident, all the doors of the bus became forcefully locked, leaving the terrified children screaming and weeping uncontrollably. They had to be rescued through the window.

Speaking with Daily Sun at the scene of the accident, Prince Nixon Okwara, Chairman of Ago Phase Two United Forum, the umbrella organisatrion of all the estates in the area, on Ago-Okota Road, said that was not the first time such was happening on the road.

Prince Okwara, who is also the Chairman, Green Field Estate Community Development Association, recalled that sometime ago, a container fell on the car of a young couple driving on the road and crushed the duo to death while they were going to church for a wedding ceremony.

He said the situation was worse at night when trucks and tankers were usually parked on both sides of the road, thereby reducing the road to one lane and causing accidents and serious traffic problem.

According to him, residents in the area had on several occasions, written to the immediate past governor of Lagos State, Mr. Babatunde Raji Fashola, to help them stop the trucks from parking on the Ago Palace Way.

He said that they had also sent a save-our-soul message to the new governor of Lagos State, Mr. Akinwunmi Ambode to come to their aid.

“We want to thank God that the 18 nursery and primary school pupils escaped unhurt. Just imagine what would have happened if those children, most of them under the age of 10, had died. We have written several letters to the government of Lagos State to notify them about the dangers the trucks that are parking on this road are causing .We have also made a lot of peaceful protests to draw the attention of government to the plight of the people living in this area, all to no avail. It seems government is waiting for something like this to happen before they can swing into action. I want to once again use this opportunity to draw their attention so that they will come to assist in clearing this road of the menace of articulated vehicles. The recklessness and manner of these trucks and trailers are causing untold hardship to the other users of the road.

Another resident of the area, Moses Onwughalu, said since the end of the tenure of former Governor Babatunde Raji Fashola, the contractors handling the Ago Palace Way have withdrawn their services probably because they were not sure if his successor would want to continue with the road project.

According to him, this had worsened the state of the road as the graded parts had turned into craters.

He called on Governor Ambode to bring the contractors back, adding that the road was very important to residents of the area and the state in general.

He also appealed to the governor to exercise his powers in clearing the road of the menace of tanker drivers.

“We have been on this matter for more than eight years. There is nothing under the law that we have not done to draw the attention of government to the menace of these truck drivers. The worst of all is that they used to tell us to our faces that there is nothing we can do, that their owners are highly connected in Abuja and other places. So, we are appealing to Governor Ambode to try and save us from the dangers on this road. The innocent school children were lucky to have escaped.

But last year, a couple going to church for a wedding ceremony was crushed to death when a container fell on their car at AP Bus Stop. The story on this road has been that of horror. Even hoodlums hide in some of these trucks at night to rob helpless citizens who are going home after a hard day’s toil,” Onwughalu said.
Posted by dubem naija blog at 12:24 pm