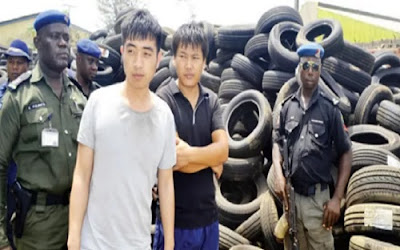 Two Chinese Nationals and their Nigerian partners charged for importing fake and substandard tyres worth N5 billion have been granted bail. A Federal High Court in Lagos, on Tuesday granted Tailung Shen, 36, Xu Jimg Yao, 22 and Chinedu Madubuike, bail of N10 million each and two sureties in like sum each.
Their companies, Sino Nigeria Limited and Nedeca International Limited, which were also charged alongside the accused were ordered to deposit N10 million each.

The trial judge, Mojisola Olatoregun, also ordered that their international passports be deposited with the registrar of the court.

The accused were arrested in February by the Standard Organisation of Nigeria, SON, monitoring and enforcement team for allegedly importing tyres which did not meet Nigeria Industrial standard.

The alleged fake and substandard tyres were said to be the largest seizure ever in Nigeria.

The accused were charged with conspiring to and importing import tyres which did not meet the relevant Nigeria industrial standards, knowing same to be in dangerous state or injurious to life of human beings.

They all pleaded not guilty to the charges.

During the Tuesday’s proceeding, Yussuf Lawan, a prosecutor from the office of the Attorney-General of the Federation, informed the court that he has four witnesses listed to testify in the matter.

Mrs. Olatoregun adjourned the case to May 15 for commencement of trial.
Posted by dubem naija blog at 8:37 pm