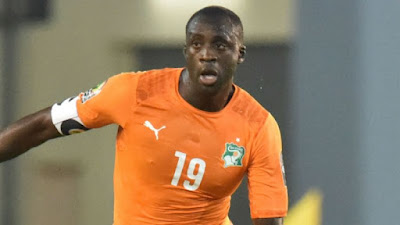 Yaya Toure, a four-time African footballer of the year from Ivory Coast has announced his retirement from international football. He made the announcement today saying it has been a difficult decision. “Writing this note was probably ‘the most difficult match of my life’,” wrote Toure.
“After 14 years at the highest level, I’m sure this is the right time for me! The fact that I am 33 now, the intensity of training and the multitude of games are not the reasons why I am making this decision.”

“I would like to say solemnly that I am stopping!!!” said Toure.

“It’s true that I had several titles at clubs, national cups, league trophies.

“I played in Belgium, Ukraine, Greece, France and in Spain where I was able to win the prestigious Champions League with Barca in 2009 and also in England, where I continue to play.

“With the Elephants, it was even more special. I learned to win for my country. That’s why I will always retain the pride in having achieved four African Golden Balls for the Ivory Coast.”
Posted by dubem naija blog at 9:17 pm