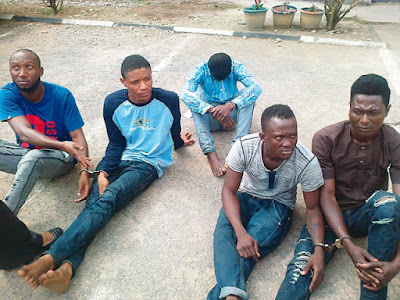 Five suspects, who posed as businessmen, have been arrested by the Lagos State Police Command for allegedly abducting and gang-raping a woman. PUNCH Metro learnt that the suspects – Ugochukwu Eso, Gabriel Obinna, Chinedu Ezechukwu, Akubueze Nnadozie and Godwin Balogun used a hotel, which the police did not disclose, in the Agege area of the state.
It was gathered that 18-year-old Obinna allegedly used a Magic Voice application on his mobile phone to change his voice to that of a woman while communicating with the victim on the telephone. Using a pseudonym, Vanessa, he allegedly invited her to inspect some non-existent goods in his house.


A police source said the gang’s mode of operation was to lure female customers into their midst, gang-rape them and threaten to blackmail the women with video recordings of the rape unless some money was paid to them.
In the latest incident on Tuesday, August 2, the gang members allegedly lured their female victim through telephone calls to their apartment, which was a hotel, before gang-raping her.
The suspects reportedly demanded N2m to release her, but she later parted with N50,000.
Our correspondent gathered that the victim reported the matter at the Isokoko Police Division and the Lagos State Domestic and Sexual Violence Response Team, Alausa, after leaving the hotel. The suspects were, thereafter, trailed to the hotel and arrested.
Speaking with PUNCH Metro while being paraded at the Lagos State Police Command headquarters, Ikeja, on Wednesday, Eso said his gang collected N20,000 from the lady and she willingly had sex with him and Obinna.

He said, “The lady came into the hotel to meet another woman. When she saw us, she became nervous. We calmed her down and told her we were just looking for money to eat and she should give us whatever she had.
“She gave us N20,000 and we began to talk freely in the room. She used some drugs and willingly had sexual affair with me and Gabriel (Obinna). After the sex, we accompanied her to the taxi and we parted amicably. It was not a rape.”

“The lady and I had been discussing on the phone; we were friends. I have a Magic Voice application on my phone which I used to discuss with her. We did not rape her. She did not make any noise during the sex; she was just smiling. We were the ones who put her on a bus. Only two of us slept with her.”

“One of the suspects, named Vanessa, chatted with the victim on Instagram. She claimed that she was a graduate and she sold clothes. According to the victim, the fake businesswoman called her from time to time to discuss business with her.
“On the day of the incident, the victim came from Oshodi to the address Vanessa gave her in Agege. As she climbed into the house, reportedly owned by Vanessa, three men pushed her into a room and increased the volume of the television so that no one would hear her voice.
“After the rape, the suspects said she should provide N2m before she would be released. She called some friends and was able to raise N50,000, which they withdrew from her bank account using the ATM. She was held hostage from 12pm to 7pm.
“The DSVRT has directed her to the Mirabel Centre, Ikeja, for a checkup. We worked with the police to ensure the arrest of the suspects and the victim has identified three of them.”

The state Commissioner of Police, Fatai Owoseni, who paraded the gang, said the police would charge them to court at the end of investigation.
Posted by dubem naija blog at 7:48 am