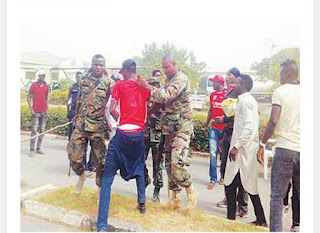 The rights of Taraba FC players was yesterday trampled upon, as soldier numbering over eleven brutalized the players for besieging the government in protest over non payment of their eleven months salaries. The players claimed they were yet to be paid their remunerations and match bonus by the state government.

They stormed the Government House at about 7a.m on a peaceful protest, preventing both staffs and political appointees from gaining access into the premises. But they met a brick wall, as the soldiers drafted into the arena by the state government gave the footballers serious beating.

Government activities in the government house as at the time of this report was on a standstill, as top government functionaries are running up and down seeking for way of persuading the players.

Speaking with newsmen, the team captain, Kelvin Njoku, expressed dismay at the “deliberate” refusal of the state government to “pay us our salaries for the past eleven months.”

Earlier, the Chief of staff to the government, Rebo Usman said the government was aware of their plights, adding that machineries have been put in place to pay them.
Posted by dubem naija blog at 3:25 pm