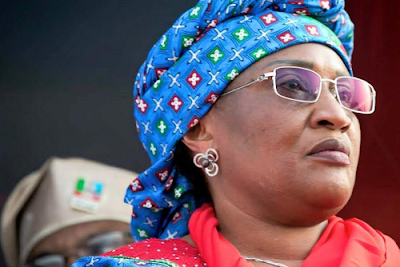 The Minister of Women Affairs and Social Development, Aisha Jummai Alhassan, has denied reports that she slumped during her two-day visit to the Internally Displaced Persons, IDPs, camp at Fulfure Local Government Area of Adamawa State.

Speaking through the Ministry’s Deputy Director of Press, Mallam Hassan Dodo, the Minister said she had gone to visit the IDP camp as instructed by the President to ensure that they were well catered for, and also to inspect the stores where the Federal Government bought provisions for the needs of the IDPs.

She added that it was paramount to ensure that the items were not diverted, saying “when I went into the stores to inspect the items, it was quite stuffy and I had to sit down. I even spoke to some press men after the inspection, I’m shocked that the media is saying I slumped.”


She said after the visit, she went to Government House to hold a town hall meeting with some women before finally leaving the state. “I don’t know why the media will report something so false,’’ she said.
Posted by dubem naija blog at 9:04 am