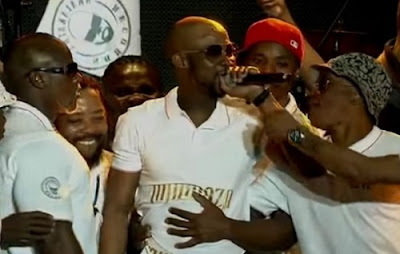 Kwaito singer Mduduzi Tshabalala, popularly known as Mandoza, has died. Mandoza is known for hits such as Nkalakatha, Godoba and Sgelekeqe, and collaborated with Danny K on Same Difference.
He started his career with Chiskop, a kwaito group formed with three of his childhood friends. He also participated in the kwaito documentary SHARP! SHARP! – the kwaito story, and the 2006 rugby drama, Number 10. Last week his family confirmed he was being treated at home for a brain tumour.

Mandoza's producer, Gabi le Roux posted the following message on Facebook on September 6: “Mpho and the Tshabalala family has asked all his friends and fans to pray for him, beckon the ancestors and keep him in your thoughts during this time."

He however died today after facing difficulties in breathing and was rushed to the hospital. He died at the hospital gate. He was 38.
Posted by dubem naija blog at 9:24 am