Mother of two pleads guilty to raping twin brothers, including her daughter's boyfriend 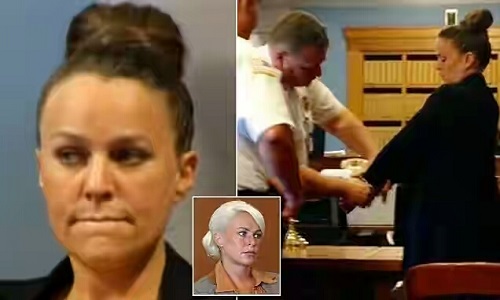 A mother-of-two from Massachusetts has pleaded guilty to raping two twin brothers, including her daughter's 15-year-old boyfriend. Heather Salines, 40, was sentenced to four years in prison and three years' probation Monday after she entered guilty pleas to two counts of child rape, two counts of child enticement, two counts of dissemination of obscene matter to a minor and one count of indecent assault and battery on a person over 14.
As part of the punishment phase, the Saugus woman was prohibited from having unsupervised
contact with children under 16, and upon her release from prison she will be required to register as a sex offender and wear a GPS ankle monitor.

During the hearing in Essex Superior Court in Salem, District Attorney Jonathan Blodgett called Salines' actions towards the two victims 'beyond despicable' and condemned her for taking advantage of her position as a trusted adult and betraying that trust 'in a most vile way,' reported the Boston Herald.

Salines was arrested in March 2014 when officials at Belmonte Middle School in Saugus discovered that her daughter's then-15-year-old boyfriend had been showing nude pictures of the woman to classmates.

The boy told police he had previously had sex with Salines and they had exchanged naked photos.

She was later questioned by authorities and admitted that they had sexual encounters on a number of occasions.

Salines has a son and daughter, and she was married at the time of the incidents. She and her husband have since divorced. Salines said she had met the boy two months before they became intimate, and he had told her about the personal turmoil he went through after 'he lost his mother at a young age'.

'When I looked at him, he did not act like a 15-year-old... he acted like a grown man,' she said, telling police things 'spiraled out of control' and she 'lost herself.’

They first had sex in a car in the parking lot of a Saugus-area park on March 17. Two days later, Salines said the teen booked a room at the local DoubleTree hotel, because there was always the threat that her daughter could walk in on them when they were at the house.

Salines was getting ready to accept a plea deal in June 2015 when the victim's twin brother came forward also accusing her of rape.

According to court papers, Salines raped the second boy at her home in February 2014, about a month before the initial alleged incident. Prosecutors said Salines sent the boy explicit pictures of herself.

A month later, officials say Salines moved on to the teen’s brother, who had just turned 15, and began sending him nude photos, a selfie with his name written on her body.

The two had oral sex and intercourse on two separate occasions, including once at the DoubleTree hotel, where the victim and Salines took a selfie while lying in bed together, according to a report in the Eagle Tribune.

Wicked Local reported that Salines' attorney, William Korman, said after the hearing that his client 'feels terrible' about the pain she has caused everyone, especially her own family, and described the plea deal as 'the best possible solution' for all involved.