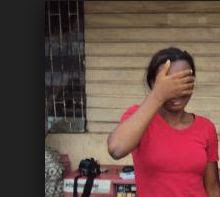 A female banana seller left people in shock after she joined in the search of a boy she had kidnapped and already sold for N450,000. The banana seller has been arrested by security operatives in Owerri, Imo State.

The suspect identified as Chibuzor Eze said to be a family friend of the boy, who hails from Umuifa village in Oru-East area of the state was playing with the boy around the family compound at about 8am when she allegedly took him to Owerri, where the kidnap was said to have been hatched.
It was gathered that the suspect allegedly sold the little boy for N150,000, as the buyer promised to pay the balance later. However, luck ran out on her after a lady in the village who recognised the boy was said to have raised the alarm when she sighted the woman with him.
Chibuzor and the alleged buyer were handed over to officers at Omuma Police Division in Oru-East.
The boy’s grandfather, Benjamin Nkemakolam thanked God for his rescue, and expressed surprise that the banana seller, who he considered a member of the family, could harbour evil against them.
The boy’s uncle, Chigozie Nkemakolam, described Chibuzor's actions as embarrassing as “she had joined them to look for the boy she allegedly kidnapped.”
Posted by dubem naija blog at 6:40 pm