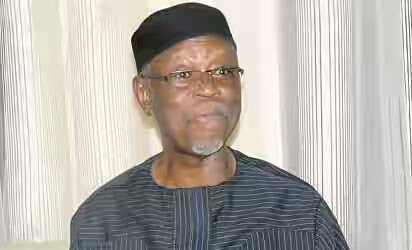 NATIONAL Chairman of the All Progressives Congress, APC, Chief John Odigie-Oyegun, has defended the borrowing plans of President Muhammadu Buhari’s administration, saying it was inevitable, in view of the current economic realities in the country. Odigie-Oyegun said Nigeria must borrow to invest in infrastructure and grow the economy.


The APC National Chairman spoke Sunday night after receiving a lifetime achievement award presented to him by the Warri Choral Society during a classical music concert the society held in his honour at the Muson Centre in Lagos.

Assuring that the loan would not be used to pay salaries, Odigie-Oyegun said: “If you read the newspapers, you hear the President being advised to pump money into the economy. So the question is where is the money coming from? Simple!

“It has to come from somewhere, including borrowing — both internal and external. To get this country going again, you have to pay contractors. Some contractors have not been paid for 10 years.

“So long as the borrowing is done not to pay salaries, which the President Buhari administration will not do, but invested to create opportunities, solve our problems of power and things like that.”

“To allow people to have money to consume, to buy goods, to pay for services so that factories can produce. So it is that cycle. We must kick-start the economy and to kick-start it will need money, lots of money.”

He also said the ongoing fight against corruption was necessary for the country to make progress.